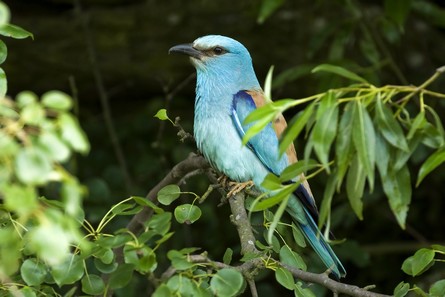 It is the only member of the roller family that breeds in Europe.

The Roller is a very distinctive bird with colourful plumage, dominated by the blue or blue-greenish colour. It is of the size of a Jay, which it is mistaken for by inexperienced birdwatchers for the Jay’s blue-and-white striated feathers of the wing. At a distance resembling other corvids, the Roller is relatively slimmer and its flight is fast, spry and straight. It will be spotted perching at exposed sites, such as dry tree tops, poles, sticks and electricity lines.

Distribution
In the past, the Roller was widespread across Poland but nowadays its population is on the verge of extinction. In the end of the 1970s, the numbers of the Roller in Poland were estimated at about 1,000 pairs, while by the mid-1980s the population had decreased by a half to about 500-600 pairs. The beginning of the 1990s saw another decline to 360-380 pairs. The decline of the Roller has progressed eastwards. It has disappeared completely in the Silesia, Małopolska and Wielkopolska regions. Estimates for Poland made in 1998 report a decrease of the population to 112-133 pairs.

At present, the population is estimated at about 30 pairs. The strongest local population is currently found in the Kurpiowska Plain (26-28 pairs, as of 2015). Without conservation measures, this species could disappear completely in Poland within a few years.

The Kurpiowska Plain has been the main breeding site of the Roller in Poland. It can certainly be stated that the condition of this population will determine the countrywide conservation status of the species. Lack of or scarce data from this area has been the reason why it was not until 1990 that the local population size of the Roller was first estimated. It is highly probable that at that time there were about 90 Roller pairs in the area. The first complete census was not performed until 1995, when 65 breeding pairs were reported. Next censuses were conducted in 1997 and 1998 and reported 61 and 48 breeding pairs, respectively. After a longer break, in 2005 another census of the whole Kurpie Roller population was carried out and 37 breeding pairs were found. The census was repeated in 2009, with 33 breeding pairs recorded. In 2010 and 2011, as part of the Polish Bird Survey, 26 and 24 breeding pairs were observed, respectively. 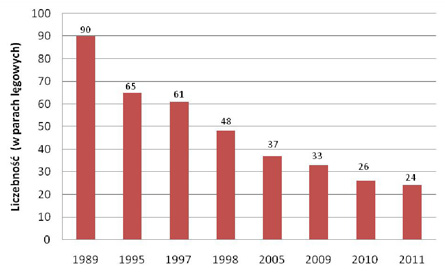 Changes in the numbers of the Roller in the Kurpie region between 1989-2011 (compiled by Andrzej Górski).

Rollers nest in hollows, typically those left after the Black or the Green Woodpecker, and will also use nest boxes. The pair-bonding is permanent and one brood is raised in a year. Rollers reach reproductive maturity in their second year of life. After arrival from wintering sites courtship starts and first eggs are laid from mid-May. The clutch size ranges from 2 to 5 eggs. After about 20 days young hatch, which stay in the nest for about a month.

Timing of breeding (by Andrzej Górski)

Food
The Roller’s food is mainly large insects, such as coleopterans and orthopterans (crickets and katydids). It will also feed on earthworms, snails, frogs, lizards, small snakes and rodents. The Roller typically hunts using a variety of observation points (perch sites), such as dry tree tops, poles, sticks and electricity lines. It specialises in catching prey directly on the ground, although at times it will also catch insects in the air.

Habitat
In Poland, Rollers breed in diverse traditional farmland in extensive sandy planes, typically neighbouring with forest and water courses. Especially important are extensively used pastures with single old trees (usually willows or poplars) or groups of old trees (such as alder groups in wet depressions).
Although today in Poland Rollers can be found almost exclusively in open areas, in the past they would also breed in large forest meadows and clearings. These ‘forest’ Roller populations are still present in Lithuania and Latvia. One of them resides just by the border with Poland in a large forest, whose western edge is the Polish Augustów Forest. 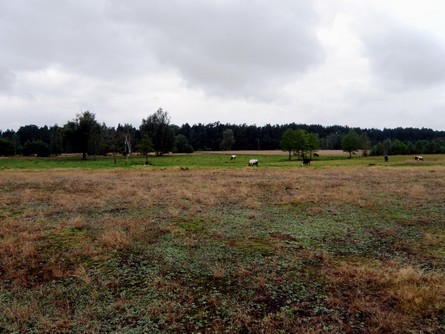 World population
The breeding range of the Roller stretches from the north-western edge of Africa (Morocco) through the southern, central and eastern Europe, western and central Asia, to eastern China and Pakistan. The Roller winters in Africa. The European population is estimated at 55,000-117,000 breeding pairs and according to surveys it has declined by 30% in the last 15 years. The Roller began retreating from its western edge of distribution range as early as in the beginning of the 20th century, gradually disappearing from countries such as Germany, Denmark, Sweden and Finland. In the last decade, it has also ceased breeding in the Czech Republic, Slovenia and Estonia. Currently, the strongest Roller populations in Europe are found in Spain, Russia, Ukraine, Romania, Bulgaria and Turkey, altogether making about 90% of the European population. 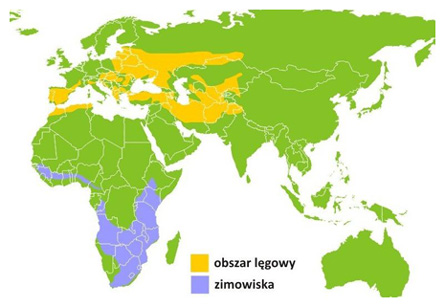