OTOP has been involved in active conservation of the Roller since 2010, when it took up the Warsaw’s RDOŚ’s project “Active forms of protection of the European Roller (Coracias garrulus) in the Kurpiowska Plain within the Mazovia Province”. Since that time, OTOP has held a countrywide monitoring plan of the species, as commissioned by GIOŚ.

The need to continue and extend the conservation measures over a much larger area called for additional resources. In the autumn of 2011 OTOP launched a new, broader project, “Active forms of protection of the European Roller in the Kurpiowska Plain” (no. POIS.05.01.00-00-344/10). The project was co-funded by the European Union from the European Regional Development Fund, as part of the scheme Infrastructure and Environment, and subsidised by the National Fund for Environmental Protection and Water Management.

At present, we are continuing the key actions that are necessary to preserve the species. Experience acquired during implementation of the two projects enabled us to choose tested methods, for example in food supplementation.

The goal of our work was to ensure that the species is protected in the future: to this end, we prepared a draft of the National Roller Conservation Plan. The draft Plan was submitted for approval to the General Directorate for Environmental Protection. We hope that after consultation it will be approved and implemented.
We have also developed planning guidelines for communes. They could be useful during creation of spatial management plans, conservation plans and environmental impact assessments.

Importantly, by protecting the Roller we contribute to the protection of other species, such as the Tawny Pipit or the Hoopoe. 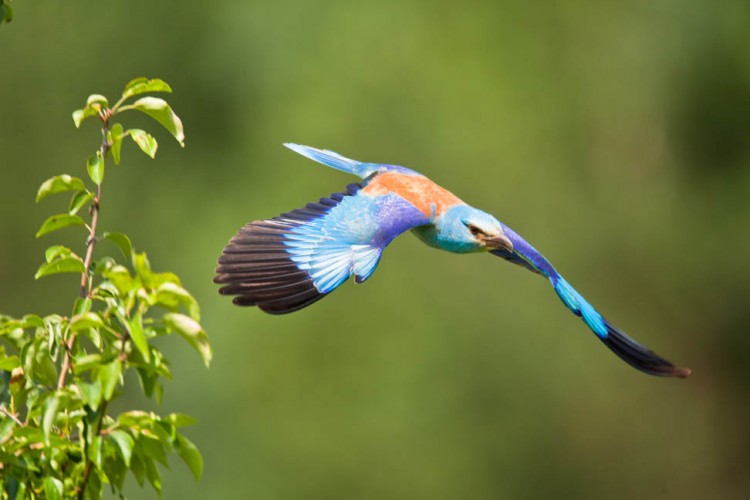 The European Roller has been decreasing in numbers not only in the northern part of its range but also in almost the whole Europe. According to estimates, the population has shrunk by 30% within the last 15 years. As more than a half of the world population of the Roller breeds in Europe, the species has been included in the Red List of Endangered Species, with the Near Threatened (NT) status. One will realise how serious this threat is knowing that in Poland, apart from the European Roller, there are only a few Red List breeding bird species, e.g. the Red Kite, the Greater Spotted Eagle, the Great Snipe, the Black-tailed Godwit, the Curlew and the Aquatic Warbler. To date, attempts have failed to pinpoint a single key factor that underlies the strong decline of the Roller numbers in the recent decades. It is believed that habitat change is one of the causes. Habitat change has been caused by changes in traditional farming practices, loss of nest sites and pesticide use. Due to scarcity of data, it is difficult to evaluate the survival of Rollers during migration and in wintering sites. However, the observed difference in breeding success between stable/increasing populations and decreasing populations points that one of the main threats for the Roller is linked to breeding sites.

The habitat used today by Rollers in Poland is typically extensive sandy plains with clear pine forests and small rivers. It will often be a mosaic of traditional farmland. Especially important are extensively farmed pastures with single old trees or groups of old trees. These habitats provide Rollers with safe nesting sites and are rich in food necessary to feed young. Maintenance of cultivated grassland with vegetation structure suitable for the Roller requires appropriate management. Meadows should not be mown in late summer. Farming should not be too intensive because it then negatively affects the abundance of the insects which are the prey of Rollers. Also the intensity of grazing should be adjusted, with the stocking density dependent on the fertility and wetness of the habitat. Today, this kind of land use is disappearing. In the recent years, in the Kurpiowska Plain extensive pastures on mineral soil have been increasingly ploughed. According to our field inspection, this practice is widespread and is constantly expanding, although it has not yet been quantified. In the Kurpiowska Plain, mineral pastures form the most important foraging sites for the Roller and should be especially protected. Disappearance, reduction or fragmentation of mineral pastures cause nesting conditions for the Roller to worsen and question the utility of other conservation measures. 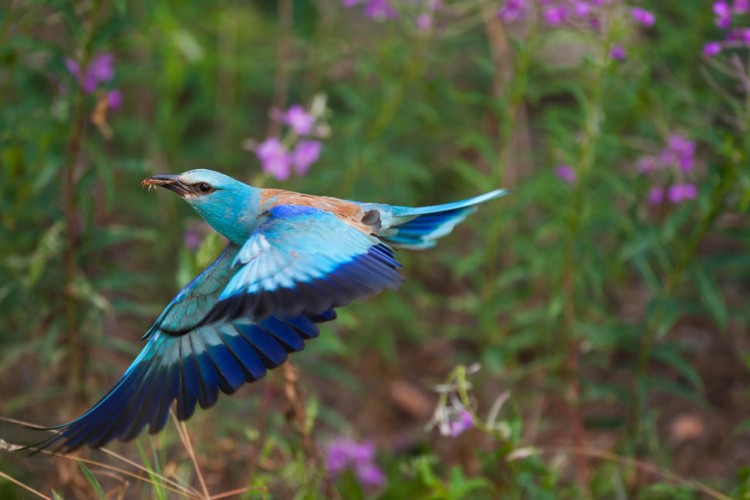 In the Kurpiowska Plain, between 1997 and 2010 at least seven nest site trees of Rollers were cut and at least twelve nest site trees fell due to adverse weather conditions (strong wind) (A. Górski – unpubl. data). At least since the end of the 1980s, the custom to plant willows has vanished, which led to a dramatic decline of new willow plantings. As the oldest willow trees died, the number of potentially available hollow trees dropped considerably (Tryjanowski P., Kuźniak S., Kujawa K., Jerzak L. 2009 Ekologia ptaków krajobrazu rolniczego. Bogucki Wydawnictwo Naukowe. Poznań). According to the European Roller Conservation Plan published by the European Union, removal of hollow trees and lack of new plantings create serious threats for the species, and both of these factors are critical in Poland (International Species Action Plan for the European Roller Coracias garrulus). Natural nesting sites of the Roller in Poland are spacious breeding hollows, most often taken after a Green Woodpecker or a Black Woodpecker, or natural hollows in rotten branches of deciduous trees. In open areas, Rollers typically nest in willows or alders, while in forest they will chose pines. Hollows taken by Rollers are up to 0.5 m deep. In South-European countries, which lack a sufficient number of suitable trees, Rollers have adapted to nesting in burrows, excavated in sunlit scarps (e.g. in gravel pits), similarly to the Bee-eater or the Kingfisher, or even in buildings (in wall cracks or roof cavities). All these nest types have also been recorded in Poland, although only exceptionally. Rollers are very much attached to their nesting places. There are nest sites that have been occupied by Rollers for over 10 years. If a tree with an occupied hollow survives winter, Rollers will likely breed there after returning from the winter quarters. They will often be so used to their hollows that when their tree is destroyed, they will abandon the territory and disappear from the area. They might give up breeding completely in that year. Rollers will use nest boxes, especially if natural cavities are less available. Therefore, when the hollow tree of Rollers is destroyed, often the only chance to keep these beautiful birds is putting up nest boxes in the area.

Below 14°C and during rainfall the activity of insects that are Roller’s prey drops to zero. The foraging behaviour of the Roller is very simple: to sit and wait. When insects are not active, Rollers cannot catch prey and bring food to nestlings, even for several hours. An especially critical period for Rollers is the first two weeks of the nestling stage. During adverse weather conditions (low temperature and rain), there is food deficiency, which might cause even whole Roller broods to die. In the north-eastern Poland, this typically occurs between June and July (the last week of June and the first two weeks of July). On average, unfavourable weather causes roughly between five to fifteen chicks of the Kurpie Roller population to die yearly. In the exceptionally rainy 2011, nearly all broods were lost in the Podkarpacie population. Of the less than twenty nests, only two fledged young while in the other nest boxes dead chicks and no signs of predation were found, which indicates that weather conditions were a likely cause of these broods’ death. With this low population size, such events are dramatic for the numbers of the Roller and might hinder its preservation. Therefore, it is not possible to take effective conservation measures without solving the problem of food shortage.

The effect of predation on adult Rollers is unknown. We know, however, that chicks or broods in a hollow or nest box can be predated by martens. Broods are also taken by woodpeckers, e.g. the Black Woodpecker. Most likely, similarly as in other species, the mortality of young Rollers that leave their nest hollow prematurely is high. Birds that have not yet learnt to fly well are certainly prone to being attacked by mustelids, foxes, birds of prey and corvids, as well as dogs and cats. According to our estimates, in the Kurpie population at least one brood is predated annually by martens. With the current low population size, even one brood lost due to marten predation could have a serious negative effect on the remaining population.

Disturbance by photographers and bird watchers

Every year hundreds of nature watchers and photographers set off in search of Rollers to watch or photograph them. The rarer the Rollers are, the more observers there are per one Roller site. The growing pressure of bird watchers and photographers has been seen in all the sites where the Roller still breeds. Rollers appear to be relatively tame and can often be seen close to human settlements, e.g. on electricity lines, hence it is believed that they are not afraid of humans. However, when they feel observed by a human, they will not fly away but instead they will stop hunting prey and feeding young. Even if they resume hunting after some time, one should bear in mind that every break in food delivery weakens the chicks.

In the regulation of the Minister of the Environment on the conservation of animal species, the Roller has been listed among species under a ban of filming, photographing and observation that could cause disturbance. In practice, photographing Rollers always requires a permit from the respective Regional Directorate of Environmental Protection (RDOŚ). These matters are also regulated by the ethical code of nature photography of the Polish Nature Photographers’ Union, which states that, ‘in the field, the highest priority must be animal safety and avoiding disturbance of their life, especially in the breeding season’ and that, ‘one must observe the current legal regulations on nature photography and conservation; and meet the requirements on obtaining relevant permits to photograph in protected areas or to photograph protected animal species’.