Where to find detailed results?

The Common Breeding Bird Survey (MPPL) is a component of the State Environmental Monitoring (PMŚ). Thanks to this, detailed MPPL results for each species are publicly available in the database of the Chief Inspectorate of Environmental Protection, i.e. the institution that coordinates the PMŚ, at www.monitoringptakow.gios.gov.pl.

Additionally, MPPL data is periodically published by the GIOŚ in the “Biuletyn Monitoringu Przyrody” (“Nature Monitoring Bulletin”, available in the section Download).

What results are provided by the MPPL?

Research on changes in the numbers of common birds requires a special approach. The MPPL is based on surveys carried out in 1 km2 sample plots, which are representative of Poland’s area. Counting birds on this scale does not allow a complete census of all individuals that are present in a plot. For this reason, the surveys rely on the assumption that if the methodological standards are met, species detectability is the same each year and the obtained count estimates are not the absolute numbers of individuals but indices of their numbers. The index of numbers is 100% (or just 1) in the first year of the survey and is expressed relative to the initial year index in the subsequent years. This way, trends of the numbers of the most common Polish breeding birds are determined. 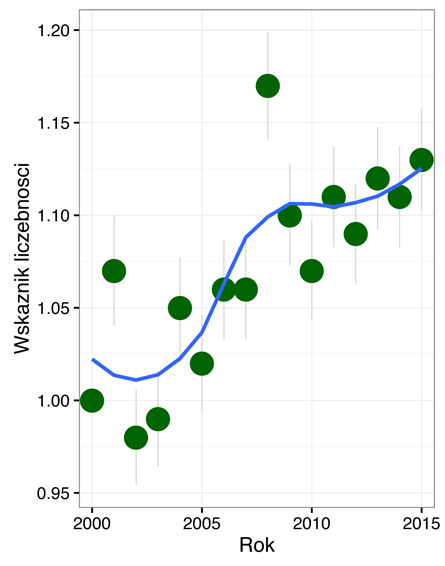 Data collected up to now, for more than ten years, allow obtaining population size trends for about 100-110 bird species. The index aggregating data on the numbers of the 100 most commonly observed MPPL species has shown a long-term increase. In 2015, it was more than 12% higher relative to the early 2000s, which confirms that most common species are increasing.

This positive trend, however, concerns a large group of species with a high variation in population trends, which we classify into six categories:

The main objective of the MPPL is to monitor changes in the numbers of those birds whose population size in Poland is typically a few million pairs. Pinpointing changes that are indicative of their habitat’s degradation, which allows taking timely intervention measures, is possible only thanks to the MPPL survey. At times, the changes are so substantial that some species could be classified as threatened according to IUCN criteria.

IUCN stands for International Union for Conservation of Nature, which has been the first world organisation to initiate work on biodiversity issues. It was established in 1948 in Switzerland. Apart from actions for nature conservation, the IUCN has also developed a list of criteria to classify each living organism to an appropriate conservation status.

The IUCN categories and classification criteria which can be used with the MPPL results are as follows:

The CR, EN and VU species are threatened with extinction. If you want to find out more about the IUCN, please visit their web page:www.iucn.org.

Which Polish species could be classified as threatened?

According to the most recent MPPL results (see the “Biuletyn Monitoringu Przyrody” no. 15 in the Download section), four species in the group of the most common birds in Poland have shown trends which classify them as threatened. According to the IUCN criteria, these are the VU species, i.e. vulnerable to extinction. They include the Lapwing, the Meadow Pipit, the Common Quail and the Tawny Pipit.

Many species are decreasing in numbers but are not yet threatened with extinction. This could concern such common species as the Chaffinch (moderate decline), which is often a surprise for many ornithologists.

To characterise the condition of the natural environment, aggregated indices are calculated, which show trends in specific ecological bird groups. The most important one is the Farmland Bird Index (FBI23), which describes the state of the natural features of farmland. The FBI23 is an aggregated index for 22 bird species: the White Stork, the Kestrel, the Lapwing, the Black-tailed Godwit, the Hoopoe, the Turtle Dove, the Skylark, the Crested Lark, the Meadow Pipit, the Yellow Wagtail, the Barn Swallow, the Whinchat, the Stonechat, the Whitethroat, the Red-backed Shrike, the Tree Sparrow, the Starling, the Linnet, the Serin, the Corn Bunting, the Yellowhammer and the Ortolan Bunting. In the first years of the MPPL survey, the index was observed to decrease rapidly, followed by a systematic increase after 2005. Since 2009, the index has been going down again. The most recent analysis has shown that the FBI species are affected not only by changes in farming but also in the climate. The FBI index has recently been driven “upwards” by warmth-loving species, which have been on the increase in Poland. 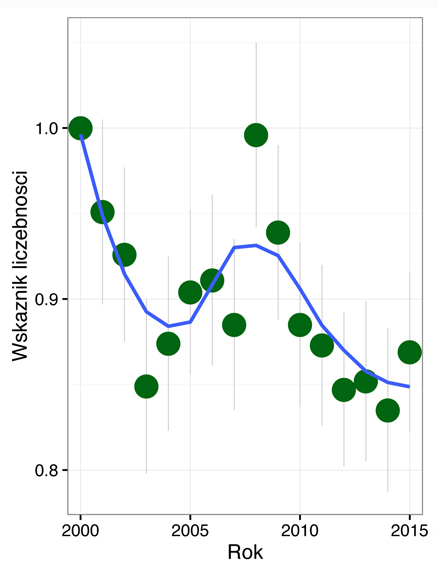