The Polish Society for the Protection of Birds has a goal to protect wild birds and their habitats. To achieve this, OTOP purchases and leases land and manages it as nature reserves. 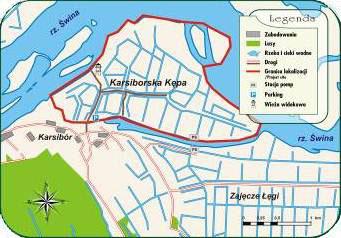 The Karsiborska Kępa Reserve is situated on an island bearing the same name, which forms part of the Swine Delta, a bird site of European importance. The Reserve is the first (and so far the only one) one that is owned by OTOP. It is one of the first ‘community reserves’ and probably the first one in which active conservation methods are applied, unlike in strict protection reserves, in which there is no human interference whatsoever.

The Karsiborska Kępa Reserve currently consists of land belonging to the Society, with an area of 177.60 ha, and land leased from the state treasury, with an area of 19.92 ha. The Reserve covers more than a half of the Karsiborska Kępa island and includes the Bielawka island, a couple of hectares in size, which lies to the north-west of the Kępa, as well as two similarly sized islands located to the north-east of the Kępa. All the islands belong to the Important Bird Area “Delta Świny”, and to the Natura 2000 special protection area “Delta Świny”.

The first thing that strikes you about the Karsiborska Kępa is the extensive open area of pastures and meadows. The island is distinguished among other islands of the Delta in that it is used as pasture land. It is surrounded by an embankment, has a drainage system and pasture fencing. The Reserve is divided into two parts: the western part, dominated by pastures and meadows, and the eastern part, with sedge mire overgrown with reeds. A landmark of the Karsiborska Kępa is its tower, which offers a magnificent view over the island, the Stara Świna river with its picturesque small islands, and the Wolin National Park. Tourist trails of the Karsiborska Kępa cross the backwater in the northern section of the island, where migrating birds rest and forage, and the breeding site of the Aquatic Warbler in the east.

The conservation goals that are not directly linked to the protection of the natural values of the Karsiborska Kępa, but are also very important for OTOP are: development of relations and cooperation between the local community and the Reserve, development of nature-friendly tourism and good relations with local self-government authorities. OTOP achieves these aims mainly by organising open-air events, walks and lessons, employing inhabitants of areas neighbouring with the Reserve and promoting the natural and tourist values of its surroundings.

Most activities done by OTOP in the Reserve are under constant internal supervision, which means that all the performed activities, their location and effectiveness are recorded. It is a broad and important area of our work. Some of the data that are collected include mapping of the cattle and horse stocking density on the pastures, mapping of mown reed beds and uneaten herbage, documenting events such as walks or camps of volunteers and recording the number of visitors. One of the key monitoring activities is surveying vegetation and breeding bird species, which aims at studying the effectiveness of the undertaken conservation measures.

Currently, apart from OTOP, only a few private owners cultivate land in the Karsiborska Kępa. There are two reed plantations and about fifteen hectares of pasture that are still grazed by cattle and horses.

The habitat of the Karsiborska Kępa is vulnerable to a range of human and natural threats. Most of them stem from tourist traffic, lack of legal protection and economic activity.

Natural threats, besides general ones such as droughts, floods etc., include also those that are typical of the Karsiborska Kępa, such as

Land cultivation in the Karsiborska Kępa started more than 80 years ago. It was in the 1920s or 1930s that the island was adapted for pasturage by building an embankment and drainage ditches. During that time, the Karsiborska Kępa was most probably the most intensively used.

After World War II, the island was used irregularly, with perhaps the most intensive grazing (by about 450 animals) in the 1970s when it was managed by the Production Cooperative “Ognica”. Management intensity has greatly decreased since then. This caused the ditches to silt up and get overgrown, and reed beds to rapidly grow and expand. In the beginning of the 1970s reeds covered only 25% of pasture area while today they cover more than a half of the pastures. These changes have created a threat for the natural values of the Karsiborska Kępa, especially for the birds that nest in low vegetation and for halophyte plants which colonised the area thanks to long-standing grazing.

The Polish Society for the Protection of Birds decided to stop the unfavourable changes and in 1993 it created a reserve on the island. Land was purchased thanks to the financial support of the Swarovski Optik company from Austria. The Reserve is one of the first private reserves and perhaps the first one in which nature is protected by means of active conservation measures.

A direct incentive for the establishment of a private reserve on the Karsiborska Kępa came from results of research carried out in its vicinity in the beginning of the 1990s. A relatively large breeding population of the Aquatic Warbler and rare wader species were found, including the Dunlin’s schinzii subspecies. Finding a breeding population of the Aquatic Warbler was especially important, as it has been one of the passerine species that are the most threatened in Europe. Establishing a reserve was also important for OTOP because it was a perfect chance to start implementing active conservation.

The most important organisations that support our reserve: