At the beginning of June while monitoring of Aquatic Warbler in Nemunas delta (Lithuania) intensive moving was registered. Such early mowing took place at the AW breeding site – Sausgalviai meadows, which are SPA (Natura2000), established for protection of AW and Great snipe (in the area also present Spotted crake, Corncrake). It is illegal according to the EU Birds Directive, because the maintenance status of an SPA and a priority species is affected. The intensification of farming practices takes place not only in mentioned Sausgalviai meadows, but in all AW breeding sites in Nemunas delta.

There is agri-environmental programme, in which farmers can participate voluntarily, but subsidies for late mowing are too small, and for farmers this program it is not interesting. Now, under Lithuanian legislation, there is no any other legal mechanism how to stop such process.

Data from previous years monitoring show that population of AW in Nemunas delta is decreasing and very low breeding success (if not zero) due to early mowing and intensive grazing could be one of the major reasons. If nothing change in the agriculture policy in the future, that will lead to the extinction of AW population in Nemunas delta or even in Lithuania. 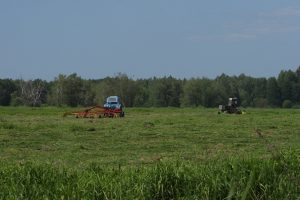