The Second Meeting of the Signatory States

Bonn, 16 May 2010 – Government officials from states across Europe and Africa as well as experts and conservationists came together in Biebrza National Park, Poland to discuss the survival of mainland Europe’s rarest songbird, the Aquatic Warbler. The UNEP Convention on the Conservation of Migratory Species of Wild Animals (CMS) convened this meeting to enhance the future of this bird species managed and protected under the auspices of the CMS agreement on the Aquatic Warbler. 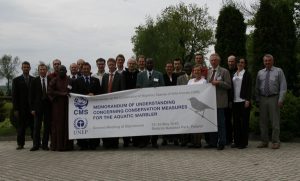 Participants of the meeting.

The meeting also adopted a new International Species Action Plan for the Aquatic Warbler, prepared by CMS’s partner BirdLife International on behalf of the European Union. It will help to protect the Aquatic Warbler throughout its range and its breeding populations expand to sites that had been lost in the past. In addition to giving a detailed account of distribution, biology and conservation status of the bird species, it envisages concrete actions to be taken by the countries. Governments are committed to adopt wildlife laws to safeguard the bird species, its breeding sites and winter quarters along its migration route. Research and monitoring will help track population trends and identify new wintering areas. The discovery of the only wintering site in Senegal in 2007 is a milestone towards long term conservation efforts under CMS.

CMS Executive Secretary Elizabeth Maruma Mrema said: “We must redouble our efforts to protect this unique songbird. New concerted actions in Europe and Africa to save this most endangered bird species during the International Year of Biodiversity will also maintain the crucial wetlands on which so many other species depend.”

At the meeting, the Polish partner of BirdLife International, the Polish Society for the Protection of Birds (OTOP) shared data with the scientific community on new technologies to restore the Aquatic Warbler’s sensitive peatland habitat. As part of a € 5 mio. project largely funded by the European Union’s LIFE Nature programme, conservation work started in 9 project sites in Poland and Germany in 2005, covering 42,000 ha.

As a result, fauna and flora in the fen mires important for the natural balance of watersheds, today have regained their former diversity in the Biebrza Valley. Fen mires act as carbon store, thus easing the greenhouse effect. Drained mires release greenhouse gases, so that in Belarus the emissions from drained mires are higher than those from all road traffic in the country. Where trees and bushes were slowly overgrowing the valuable peat meadows, lapwings, redshanks, black-tailed godwits, great snipes and the return of the Aquatic Warbler can now be observed.

The Aquatic Warbler is the rarest and the only globally threatened passerine bird found in mainland Europe. Apart from a very small remnant population in West Siberia, its breeding grounds are completely confined to Europe.  Once widespread and numerous in fen mires and wet meadows throughout the continent, the Aquatic Warbler has disappeared from most of its former range. Nowadays, its global population of only 10,200-13,800 males is confined to less than 40 sites in only six countries, with four sites supporting over 80 % of the global population. The only regular wintering site known so far is the one discovered in Senegal. Habitat loss in Sub-Saharan Africa is likely to turn into a bottleneck.

The Aquatic Warbler is a specialist of large open sedge and fen mires, which have suffered a very severe decline in western and central Europe due to habitat loss. This was caused mainly by drainage measures to facilitate agricultural use and peat extraction. Also changes in the water management such as channelizing and deepening of river beds had a severe impact. Agricultural abandonment and uncontrolled burning and draining of wetlands have led to serious consequences. In the wintering grounds, habitat loss as a result of population increase, fresh water reservoirs, hydro-agriculture, desertification and overgrazing are most severe.

The meeting agreed to extend the geographical coverage of the agreement, originally comprising 15 countries, to include 7 new countries in Europe and Africa (Luxemburg, Mali, Mauritania, Morocco, Portugal, Slovakia, Switzerland) along the migration route of the Aquatic Warbler and in its wintering areas in sub-Saharan Africa.

During the conference, France and Mali signed the CMS agreement to join the other 12 signatory states. France is especially important, because the entire world population passes through France once or twice a year, when the birds depend on intact refuelling stations. Mali is considered a potentially critically important country for the Aquatic Warbler. Scientists believe that a very important part of the world population could overwinter in this country, an international expedition aimed at identifying its wintering sites is planned for next year.

Following World Migratory Bird Day 2010, celebrated around the world on 8-9 May, this expert meeting is the first one to adopt the theme ‘Save migratory birds in crisis – every species counts!’