As it was reported earlier, the first important wintering site of the Aquatic Warbler, Europe’s most threatened migratory songbird, had been discovered in and around the Djoudj National Park in north-western Senegal.

Estimates of BirdLife International’s Aquatic Warbler Conservation Team (AWCT) show that from 5,000 to 15,000 birds winter in Djoudj, therefore this site could hold up to 60 % of the global population. Of prime importance is now the question: Are there other important wintering sites, and where to search for them? If there are more sites, we have to find these sites quickly in order to be able to protect them. Otherwise, all the conservation work carried out at the breeding and stopover sites might stay without effect, if the birds starve during winter.

Hence, the AWCT organised a second expedition to Western Africa in January 2008 in order to investigate a number of potential sites in northern Senegal and southern Mauritania. Using satellite images, these sites had been identified, because their water regime was similar to the one found in the Djoudj National Park. Unfortunately, no Aquatic Warblers could be found at any of these sites. Some of them are probably suitable for Aquatic Warblers earlier during the winter (the dry season of Senegal), but were now dry. Other sites were clearly unsuitable.

Meanwhile, the birds were again present in good numbers in the Djoudj area, where a German PhD student is now researching the habitat needs of the species in order to identify the best ways how to protect the species at this site. Here, the team could even catch two birds, which they had ringed exactly one year ago at the same spot during the first expedition to Senegal. Since then, both birds had migrated back to Europe, spend a short breeding season of three months, hopefully breeding successfully, and flown all the way back to the same area of grass swamp in Africa.

Back in Europe the additional information collected at the sites without Aquatic Warblers (absence information) could be used to refine the predictive quality of the satellite image analysis. A new map of potential wintering sites, showing the same kind of vegetation (not water regime) as the Djoudj National Park has been prepared. This preliminary analysis indicates such habitat is very limited, but still potentially sufficient to support the whole world population, whose breeding sites cover under 1,500 km2. But it is clear that good wintering habitat for the Aquatic Warbler could soon become a limiting factor for the species, should more of it become destroyed.

The AWCT now plans to check the sites identified in the new satellite study, and hopefully will be able to confirm more suitable wintering sites at which conservation action can then be targeted. 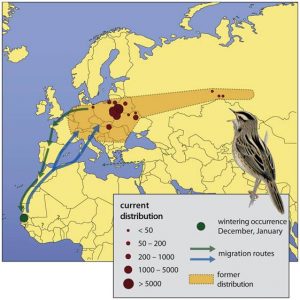