The Aquatic Warbler piece featured in a very popular series on BBC4 radio, the most important talk radio in the UK. The series is called „world on the move” and talks about the big migrations that animals on our planet do.

The Aquatic Warbler was chosen to feature in this series because it is Europe’s rarest songbird, because it is the only globally threatened songbird that regularly visits the UK on migration, because there is so much work going on to protect this species and because we have only recently found its wintering sites in Africa using a mix of interesting methods.

The interview was given by Lars Lachmann, LIFE-wodniczka project coordinator in Poland and was broadcasted on 2nd September 2008. There are two parts to the interview:

– the first from the Biebrza Marshes in Poland, introducing the bird and its habitat, the Biebrza Marshes and explaining the work that is being done to conserve the species at its breeding site, e.g. during the OTOP AW LIFE Project. The decision to make interview in Biebrza was not incidental: namely there was constructed a famous boardwalk, which had made Biebrza the world best place to watch aquatic warblers. Thanks to this construction no specific equipment required to get to the very heart of the mire.

– the second part was done in the UK. It is about how the BirdLIfe International Aquatic Warbler Conservation Team managed to find the wintering grounds of the species in Senegal with a combination of methods: isotope analysis, satellite images, literature search and ringing in the field. 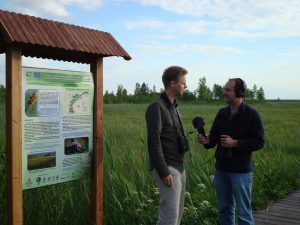