The site was discovered by local people from the Lublin Ornithological Society: at first by Robert Wroblewski & Ewa Dzaman, later on visited also by Pawel Lapinski and Krzysztof Kraczkowski. It is located in Lublin area, SE Poland, in Bug river valley, just several kilometers SE of Dorohusk, at the border with Ukraine.

The site was hosting some 48 singing males (after a full area count), and females feeding chicks were observed there. Roughly the area of meadows is 2 square km. AWs seem to persist there, as all 3 birds first ringed on 20 June, including a male ringed on migration in France and a female with a brood patch, were re-captured on 22 July during a second ringing session. So, there were still some singing birds on 22 July.. This means, the birds have stayed there over the whole season. Still, any AW fledglings were not noticed over the entire afternoon, although the line-flushing method has deliberately been used to get young birds. 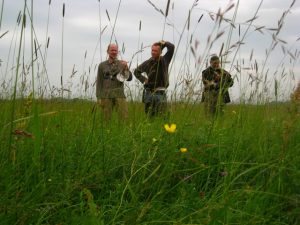 The habitat was quite exceptional for AW, at least in comparison to the known sites in East Poland and Belarus (but more similar to some sites in Pomerania and Lithuania).

Hydrology. These are floodplain meadows, in spring regularly flooded by the river Bug. So perhaps the meadows can be really wet in some years, but looking at the vegetation composition they can not be wet permanently for a longer period. There is no working drainage system, and not much has really changed during last 30-50 years in that area. This season the meadows were completely dry, apart from former river oxbows, and the water table seemed to be at least 60cm lower than the ground level – comparing with the water level in the oxbow lakes. 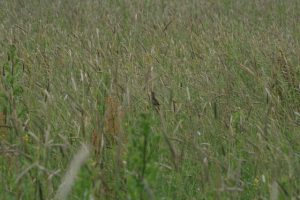 Soil. Ex facte, these are mostly alluvial loose soils, with a rich organic layer on top, perhaps a bit of sediments here and there, and mostly sandy, well-drained base (hence there’s no need to drain them artificially). But to prove this, some good soil maps need to be found or soil samples need to be taken.

Vegetation is dominated by Alopecurus pratensis, as addition some Arrhenatherum, Gallium, Rannunculus, Cirsium and Rumex. The meadows were mostly managed by haymaking (1-2 times per season). The habitat seems to be unusual for an Aquatic Warbler breeding site, however it’s position was special – just between known and stable Polish and Ukrainian breeding sites. The distance between Husynne and Roskosz mire (the SPA ‘Chelm marshes’, Poland) is 12 km, between Husynne and Bile/Pesochne lakes (Volyn region, Ukraine) is 45 km. Otherwise, it seems that that sort of meadows is reasonably common in many places around. For instance, the vegetation does not differ so much from that even in the German Oder valley, although the site Husynne is probably drier.

Jaroslaw Krogulec (OTOP – BirdLife Poland) suppose that one of the potential driving factors of surplus of birds can be bad water conditions in one of the key Chelm marshes – Rozkosz (the closest to Hysynne site). It holds more than 60% of Chelm population (124 of 195 males). Within last three years the water level on most of the Roskosz area exceeded 50-60 cm – much higher than the optimum in previous years of 15-25 cm. In effect there was 50% reduction of AW population in comparison to 2004. This year there was extremely high water in all wetlands of Lublin Region due to high precipitation in May and June. In last two years OTOP has prepared a management plan for the SPA ‘Chelm Marshes’. One of the key management prescriptions is water level regulation at Roskosz.

The observations of Janusz Kloskowski (Institute of Biology, Lublin University) at the adjacent Roskosz mire support Jaroslaw’s idea that the AW might move to the new site due to bad conditions at Roskosz. Water was terribly high at Roskosz mire this year: on 27 June water was ca 50-80 cm high and dry patches or even water levels less than 20 cm deep were practically absent. The strange thing was that AW males were actively singing everywhere, although there was certainly no chance for any nests to survive. However, it is likely that they were less abundant than in the previous years.

It must be also underlined that the birds at Husynne were present during the whole season. They were discovered in late May, with fully singing males, and feeding females were observed during the normal time for the first broods – on June 20th. The high water at Roskosz apparently came later than the birds were discovered at Husynne and birds started to breed in the usual breeding period at Husynne, while it was quite normal or even dry everywhere in the area including the Chelm marshes. The wet weather with extreme conditions came later.

Although exceptionally high water came later this year, the high water table in Roskosz is a steady problem of the last few years. In the same time here was a documented decrease of breeding AW in Roskosz. So, this factor as a reason of searching for new sites by males of AW, can not be excluded. Further to unsuitable water conditions, there could be other reasons for low suitability of Roskosz for AW breeding as well. The area is strictly protected, it is not used, and it has not been burnt in the last years. In consequence, a high layer of litter and a dense thicket of old, dry Cladium has evolved. This poor habitat quality might indeed induce dispersion of the local AW to other sites.

Besides Husynne, there was an example of untypical AW habitat choice in Biebrza. Some years ago in July Dr. Andrzej Dyrcz found 12 nests of the Aquatic Warbler containing eggs in dry Carex/grass meadow. All broods were successful.

Here is also another assumption. Michal Maniakowski (OTOP – BirdLife Poland) considers that the Husynne meadows are another variation of AW habitats. The meadows however being clearly drier than for example the Chelm Marshes can be reasonably wetter during a normal spring (this season was very dry at the beginning all over the country). And that lucky location between the regular core AW sites in Poland and Ukraine helps to favor the Husynne meadows against other sites with similar vegetation. For example, there are thousands of hectares of such type of habitats in Germany and Dr. Martin Flade in his diploma thesis describes 1,600 ha of such meadows, but without AW. So he assumes that the location between key breeding sites in Poland and Ukraine is obviously a key factor.

Hopefully it was not just an exceptional year, and the birds (try to) breed at Husynne each year. In case it is a regular site and the reproduction would be too poor due to suboptimal habitat conditions it would mean that we have a regular supply of some surplus birds from the areas nearby, which wouldn’t be bad news. Such dispersion to the new habitats is promising and this new site indicates that meadows surrounding the traditional AW sites should be carefully checked, as small-scale dispersal to suboptimal habitats may be common. Besides that a more detailed habitat description and a carefully prepared research of AW breeding success at Husynne are scheduled for the next year.