The Bern Convention, Europe’s treaty on nature conservation, is a binding international legal instrument which covers most of the natural heritage of the European continent and extends to some States of Africa. Its aims are to conserve wild flora and fauna and their natural habitats and to promote participation and representation in the environmental debate, monitoring and, to some extent in the decision-making process. The Convention was adopted on 19 September 1979 and entered into force on 1st June 1982. 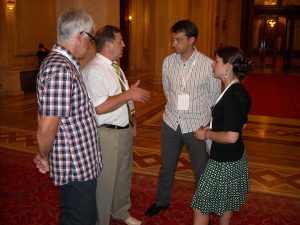 Belarusian delegates agree final steps with the Secretary of the Convention in July 2012.

After a successful and increased cooperation over the past three years, through the effective implementation by Belarus of the Council of Europe/European Union project aiming at setting-up a network of areas of special conservation interest in the country, Belarus has now done a concrete step towards the integration – at national level – of pan-European recognised nature conservation standards thus also fostering a more coherent conservation approach at regional level.

The list of all Parties to the Bern Convention is available on the Council of Europe Treaty Office website.

Main achievements under the Convention in 2012

In 2012 the Convention registered eleven new complaints put forward by citizens or NGOs. Thirtyseven natural and protected areas located in Switzerland were adopted as official “Emerald Sites”, therefore benefitting from now of the special protection provided by the Convention’s Emerald Network of Areas of Special Conservation Interest. A remaining total of 35 737 228,11 ha in seven Central and Eastern European countries, including Belarus, and the South Caucasus, are being currently evaluated to integrate the Emerald Network in the near future. Seven specific Recommendations were adopted to address issues such as responding to climate change, preventing the invasion of non-native species, conserving Europe’s populations of wolves and bears, preserving marine biodiversity.