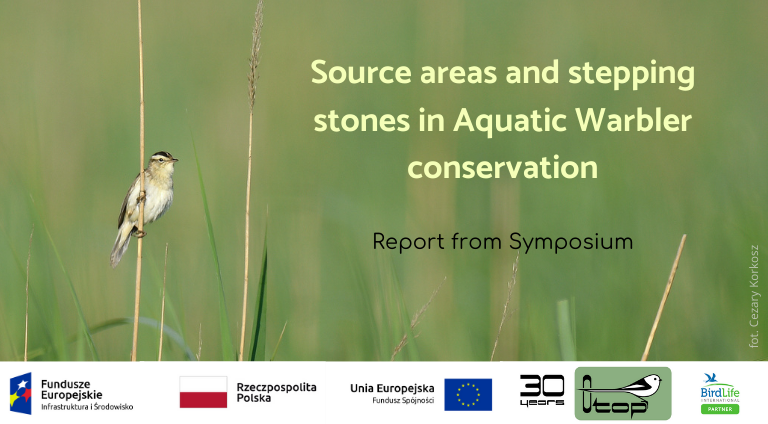 On March 16 and 17, 2021, an international symposium Source areas and stepping stones in Aquatic Warbler conservation was held as part of the project Strengthening the South-Eastern Metapopulation of Aquatic Warbler Acrocephalus paludicola in Poland. Its main topic was to summarize the current knowledge about the distribution, abundance and protection of this valuable species of our birdlife. Poland, as one of the most important regions on the Aquatic Warbler map of the world, is an important partner of international initiatives for the protection of these birds. With its thirty-year history, the Polish Society for the Protection of Birds shows that their protection is still a valid, important activity that requires taking up new challenges.

One of them was the organization of the Symposium, originally planned as a stationary event gathering ornithologists and specialists, and necessarily transferred to the virtual world. However, it did not limit the spontaneity of the discussion, the importance of the presented reports, and it did not diminish the group of professionals who exchanged experiences, ideas and plans. 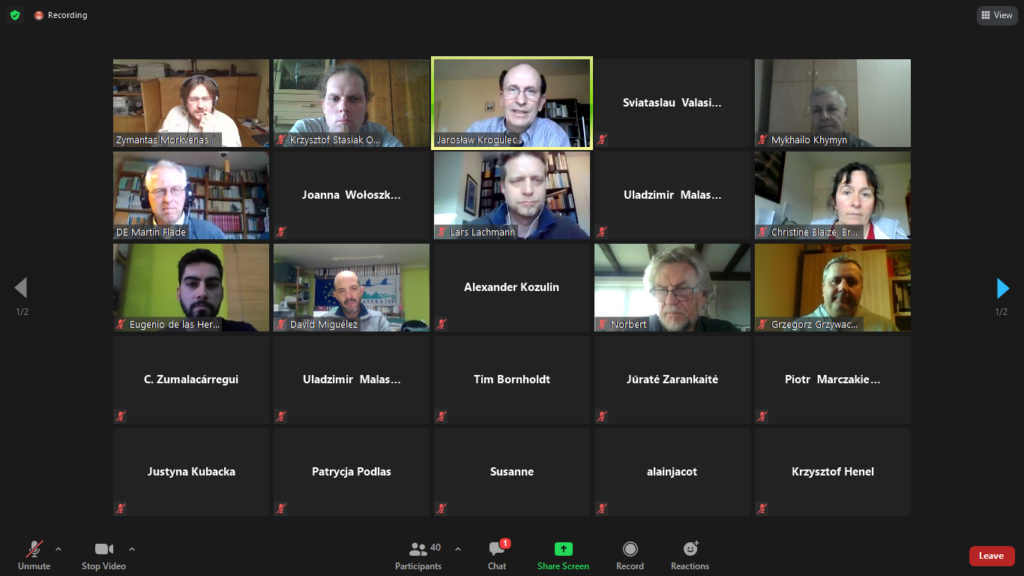 Over 50 people from 10 countries took part in the Symposium. The regions with the largest aquatic warbler breeding grounds were in the lead – Poland, Belarus, Ukraine and Lithuania. The next guests are representatives of the Aquatic Warbler Conservation Team from Germany and Latvia. There were also representatives of France and Spain, which host Aquatic Warbler during their flights, and considering the latest research – they are an extremely important part of its annual life cycle. It was with great pleasure that we hosted representatives of the Royal Society for the Protection of Birds from Great Britain.

As the event is part of the 30th anniversary of the Polish Society for the Protection of Birds, there were a few words of introduction and a fascinating retrospective telling about the origins, development and current achievements of the Society, especially in the field of Aquatic Warbler protection.

During the Symposium, we had the opportunity to listen to 14 presentations. First, Martin Flade, chairman of the Aquatic Warbler Conservation Team, outlined the state of the world’s population. Then Jarosław Krogulec highlighted the most important moments in the history of OTOP in the aforementioned presentation, after which Krzysztof Stasiak presented the current state and trends of the Polish Aquatic Warbler population on the basis of data obtained under the OTOP projects, the National Aquatic Warbler Monitoring and information collected by ornithologists and provided via the Ornitho.pl portal. The results obtained in 2020 deserved special attention, on the one hand, very difficult for birds, mainly due to drought and numerous fires, and on the other hand, bringing hope in the form of five newly detected sites of Aquatic Warbler. 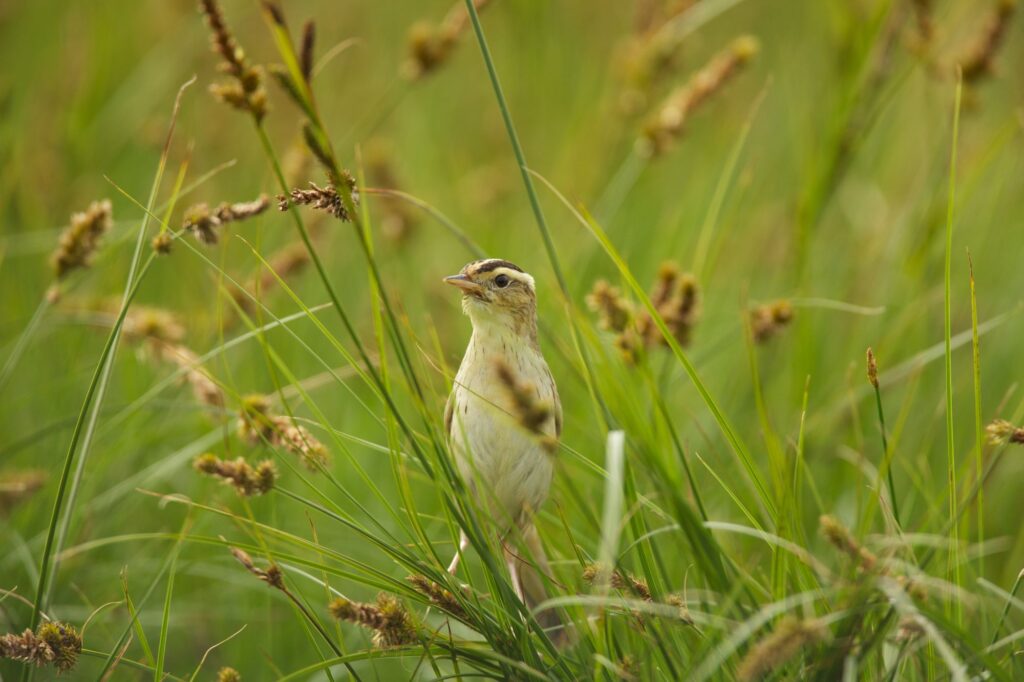 After a short break, Žymantas Morkvenas from Lithuania presented an amazing and successful project of translocating Aquatic Warbler chicks from sites in Belarus to Lithuania. Thanks to the tremendous amount of work done by the team, detailed planning and attention to detail, 100 chicks were moved within two years. The experience of this project is an invaluable source of knowledge for subsequent activities of this type.

The situation of Aquatic Warbler in Belarus, both in the largest sites of the species in the vast peat bogs of Belarusian Polesie, and in small sites scattered around the country, were discussed by Alexandr Kozulin and Uladzimir Malashevich. The specificity of the largest sites in this country consists primarily in their extent. This forces to take specific types of protective measures, such as controlled winter burning of vegetation, which replaces mowing and prevents spring fires, which are much more dangerous for nature. Large sites in Ukraine and also extremely valuable for the population were discussed by Mykhailo Khymyn. The situation of birds there  also requires active protection and care for the breeding habitats of Aquatic Warblers. 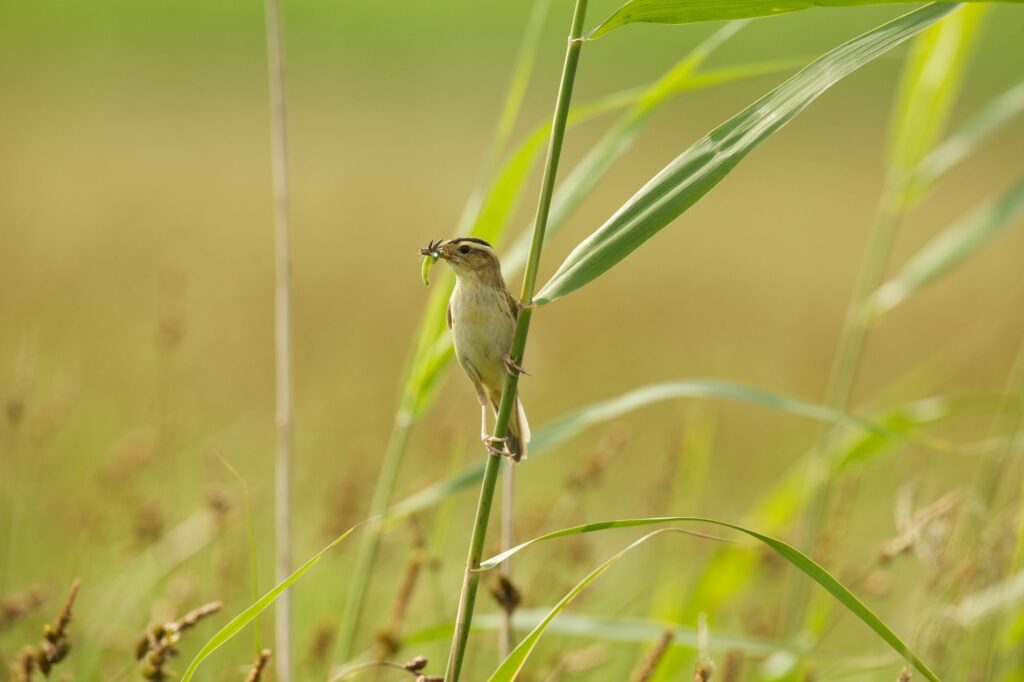 The third session during the first day of the Symposium concerned the occurrence of Aquatic Warbler outside the breeding areas. In the first presentation, Martin Flade presented the results of Aquatic Warbler migration studies with the use of geolocators. Thanks to them, very valuable data was obtained on the migration time, flight routes and places where birds stop to rest and recover. The protection of these areas is as important as the breeding grounds, as it ensures that birds can migrate safely. On the basis of these studies, it is also possible to determine the wintering grounds of birds in Africa, which makes it possible to assess their condition and possible need for protection.

The most important stopovers during the migration of Aquatic Warbler are in France and Spain. In both countries, extensive protection and monitoring activities are carried out to preserve the best possible condition of their habitats. The situation in France was presented by Christine Blaize, while the presentation about the positions in Spain was given by Eugenio de las Heras, discussing projects financed by the LIFE fund concerning the protection of these places.

A lively discussion followed each presentation. The first day of the conference ended around 5 p.m. 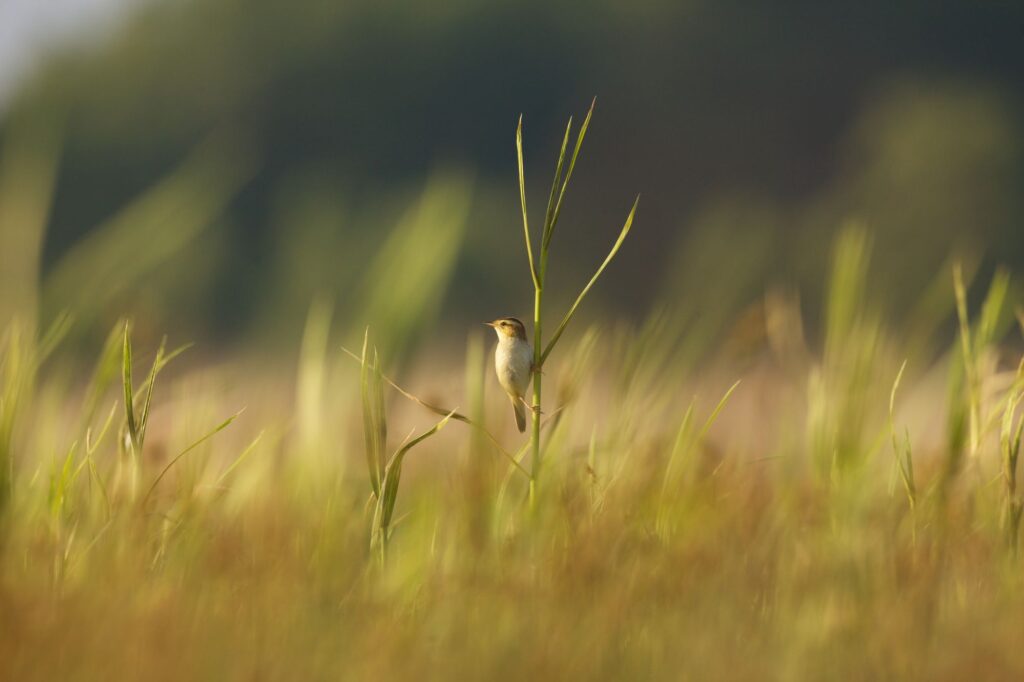 In the first presentation, Jarosław Krogulec showed the status and progress of the project Strengthening the South-Eastern Metapopulation of Aquatic Warbler Acrocephalus paludicola in Poland. It is one of the most important activities currently carried out in the field of the protection of the species habitats in Poland. It concerns small sites forming a chain of bridging habitats along the Aquatic Warbler ecological corridors. In the light of the previously discussed data, especially from Poland and Belarus, this type of habitats should receive much attention.

Another presentation, presented by prof. Grzegorz Grzywaczewski, concerned the condition and threats to the population of Aquatic Warbler in Bagno Bubnów and Bagno Staw in the Poleski National Park. It is the second largest population of Aquatic Warbler in Poland, which has been the subject of detailed studies for many years. One of the most important threats at present is projected hard coal mine in the immediate vicinity of the Park. 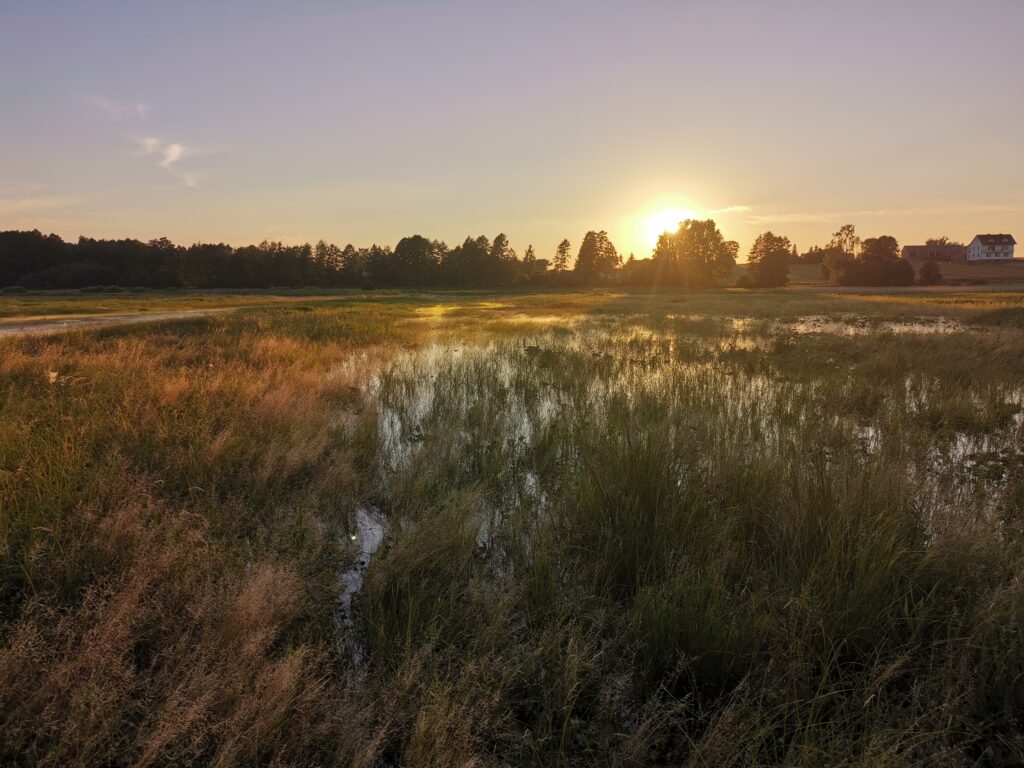 The last presentation, by Julia Kral and Joanna Potrykus, discussed the preliminary results of research on the relationship between male Aquatic Warblers during the breeding season. The research is based in part on analyzing how these birds sing and identifying individual males based on their voices.

After a short break, all interested participants of the Symposium and members of the Aquatic Warbler Conservation Team took part in the Team’s working meeting. In its course, the current problems, threats and actions taken related to the protection of Aquatic Warbler and its habitats were discussed, as well as the planned directions of work and expected events that may affect the condition of the species in the entire area of occurrence.

The sessions ended around 5 pm. The symposium, despite the need to introduce a remote form, proceeded smoothly, and the level of lectures and discussions was very high. It provided all interested parties with a comprehensive update of the knowledge about the state and prospects of the species. An additional advantage is the possibility of publishing on the OTOP channel on the YouTube platform recordings of individual papers along with a discussion about them.

You can watch all the speeches on our YouTube channel:

All presentations in PDF format you can find below:

03. Stasiak_Aquatic Warbler in Poland. State of the population

04. Morkvenas_The state of the Aquatic Warbler population in Lithuania

06. Malashevich_Metapopulation of Aquatic Warbler in Belarus

07. Poluda_The state of the Aquatic Warbler population in Ukraine

13. Krogulec&Stasiak_Assumptions and state of implementation of the project Strengthening the south eastern Aquatic Warbler metapopulation in Poland