One of Europe’s last remaining ornithological mysteries has been solved finally, thanks to five years of detective work by an international team of researchers. An expedition team has pinpointed the wintering grounds of Europe’s most threatened migratory songbird – the aquatic warbler – in western Africa. This robin-sized bird nests in summer in the marshes of eastern central Europe – principally Poland, Belarus and the Ukraine – and some pass through southern England on migration to its previously unidentified wintering grounds.
Researchers from the RSPB and BirdLife International have combined state-of-the-art scientific analysis with traditional fieldwork to unravel the secrets that this bird has been hiding. Earlier this month, the expedition, working with African colleagues, discovered good numbers of aquatic warblers in an area of about 100 square kilometres within the Djoudj National Park, in north-west Senegal. Preliminary estimates range from 5-10,000 birds at this single site. Before this discovery, it was assumed the birds, like many other warblers, spent the winter in Africa, but no one knew where. 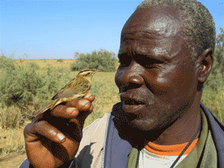 Indega, the ornithologist from Djoudj NP, holds the first Aquatic Warbler that was caught by the expedition

The aquatic warbler has declined dramatically in Europe over the last century, and now its global population is down to 15,000 pairs – largely because of drainage of its wetland nesting sites.
The research team used isotope analysis of aquatic warbler feathers to help narrow their search. Catching aquatic warblers on the bird’s European nesting sites, researchers took feathers from the birds subjecting them to an isotope analysis. Knowing that the feathers would have been grown on the African wintering grounds, the researchers looked for patterns of isotopes, in conjunction with isotope maps, which would give a hint on the wintering grounds. This study revealed that the birds spend the winter at sites in a zone just south of the Sahara. An analysis of the few African records in combination with a computer modelling of potentially suitable climatic conditions led researchers to likely areas bordering the Senegal river. 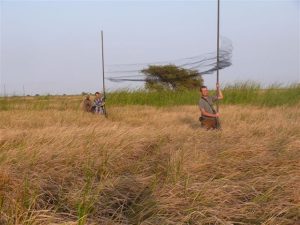 The RSPB’s Lars Lachmann, who co-organised the Senegal expedition, said: “The precipitous decline of the aquatic warbler in Europe has made it the focus of a transnational European conservation effort, which is currently showing its first successes. However, because this bird spends less than half its time in Europe, it is essential that we know more about where it spends the winter and whether these sites are threatened too.”

Although delighted by their discovery, the research team has raised fears for the bird’s future in Africa. Lars Lachmann added: “Thankfully, substantial parts of the bird’s wintering range fall within protected areas, with the Djoudj National Park alone possibly holding up to a third of the world population. This wetland, on the southern edge of the Sahara, is likely to be threatened by the southward advance of the Sahara fuelled by climate change. This encroachment is likely to limit the water supply for the national park. 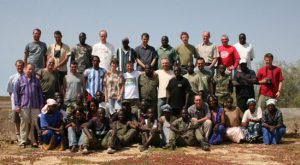 “The heroes” – European and Senegalese participants of the expedition

“Other sites thought to have formerly held this bird in winter, have long since been converted into farmland and sugarcane plantations, while other potential sites will be placed under even greater pressure by increasing drought conditions.

“Bizarrely, the story of the aquatic warbler in Africa seems to mirror the disastrous loss of the species’ European nesting sites, where the bird now nests regularly on fewer than 40 sites. But knowing where they are in winter now provides a starting point to mirror the successful European conservation efforts in Africa.”

Future work in the field and with satellite maps will focus to identify other potential sites in southern Mauritania and elsewhere in western Africa.

Finding the wintering grounds is a major step in the implementation of the International Action Plan for the Conservation of the Aquatic Warbler, which had been agreed and signed as a Memorandum of Understanding under the Bonn Convention (CMS) by 12 range states of the species, including Senegal, in 2003.

The expedition was financially supported by the RSPB, the UK government (DEFRA), the Bonn Convention (CMS), and the German Ornithological Society.