Memorandum of Understanding Concerning Conservation Measures for the Aquatic Warbler Acrocephalus paludicola was concluded on April 30, 2003 in Minsk (Belarus), under the auspices of the Convention of Migratory Species of Wild Animals (Bonn Convention). Annexed to the Memorandum is the detailed Aquatic Warbler Species Action Plan, which identifies threats faced by the species and ways to address these threats.

Two meetings of Range States took place since this governmental agreement had been signed. The second meeting of Range States was held in Biebrza National Park, Poland in May 2010. The meeting took place in conjunction with the final conference of EU LIFE Nature Project „Conserving AW in Poland and Germany” implemented by Polish partner of BirdLife International, the Polish Society for the Protection of Birds (OTOP). The scientific conference shared data on new technologies to restore the Aquatic Warbler’s sensitive peatland habitat.

As a result of the meeting a new International Species Action Plan for the Aquatic Warbler was adopted. The meeting also agreed to extend the geographical coverage of the agreement, originally comprising 15 countries, to include 7 new countries in Europe and Africa (Luxemburg, Mali, Mauritania, Morocco, Portugal, Slovakia, Switzerland) along the migration route of the Aquatic Warbler and in its wintering areas in sub-Saharan Africa. During the conference, France and Mali signed the CMS agreement to join the other 12 signatory states. France is especially important, because the entire world population passes through France once or twice a year, when the birds depend on intact refueling stations. Mali is considered a potentially critically important country for the Aquatic Warbler.

The third meeting of Range States is planned to be conducted in Lithuania, in 2015. 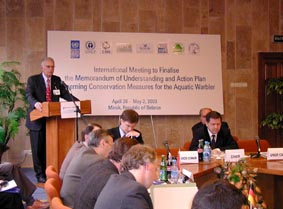 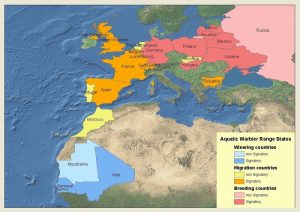